Video Quality Metrics or Video Quality Assessment (VQA) benchmark provides performance of No-reference (pristine signal is not required) and Full-reference methods, which are capable of assessing the quality of different videos. Unlike images, videos contain temporal information, whose usage can lead to a more reliable prediction of quality. That’s why the proposed benchmark includes both VQA and IQA methods, which have been tested on a range of diverse sequences, compressed with different standards, presets, and bitrates.

To make the research more objective, experiments with methods performance evaluation on some pools of videos separately have been conducted. Finally, we have provided all the results and analysis not only through tables but also using visualizations to simplify the perception of the great amount of information.

The ranking of some existing methods proposed through this benchmark may help the reader either detect features in top methods to create their own SOTA VQA method or choose the best methods for their aims, such as finding the perceptual optimization of RD tradeoffs in video encoding and streaming.

The dataset was formed with 37 clips from Vimeo, which were selected from 18,000+ open-source clips with high bitrate (license CCBY or CC0). The clips include videos recorded by both professionals and amateurs. Almost half of the videos contain scene changes and high dynamism. Moreover, the synthetic to natural lightning ratio is approximately 1 to 3.

The choice of videos collected for the benchmark dataset employed clustering in terms of space-time complexity to obtain a representative distribution.

Finally, an additional preprocessing step was added to unify chroma subsampling of videos, which affects evaluating complexity. All videos were converted to YUV 4:2:0 chroma subsample. 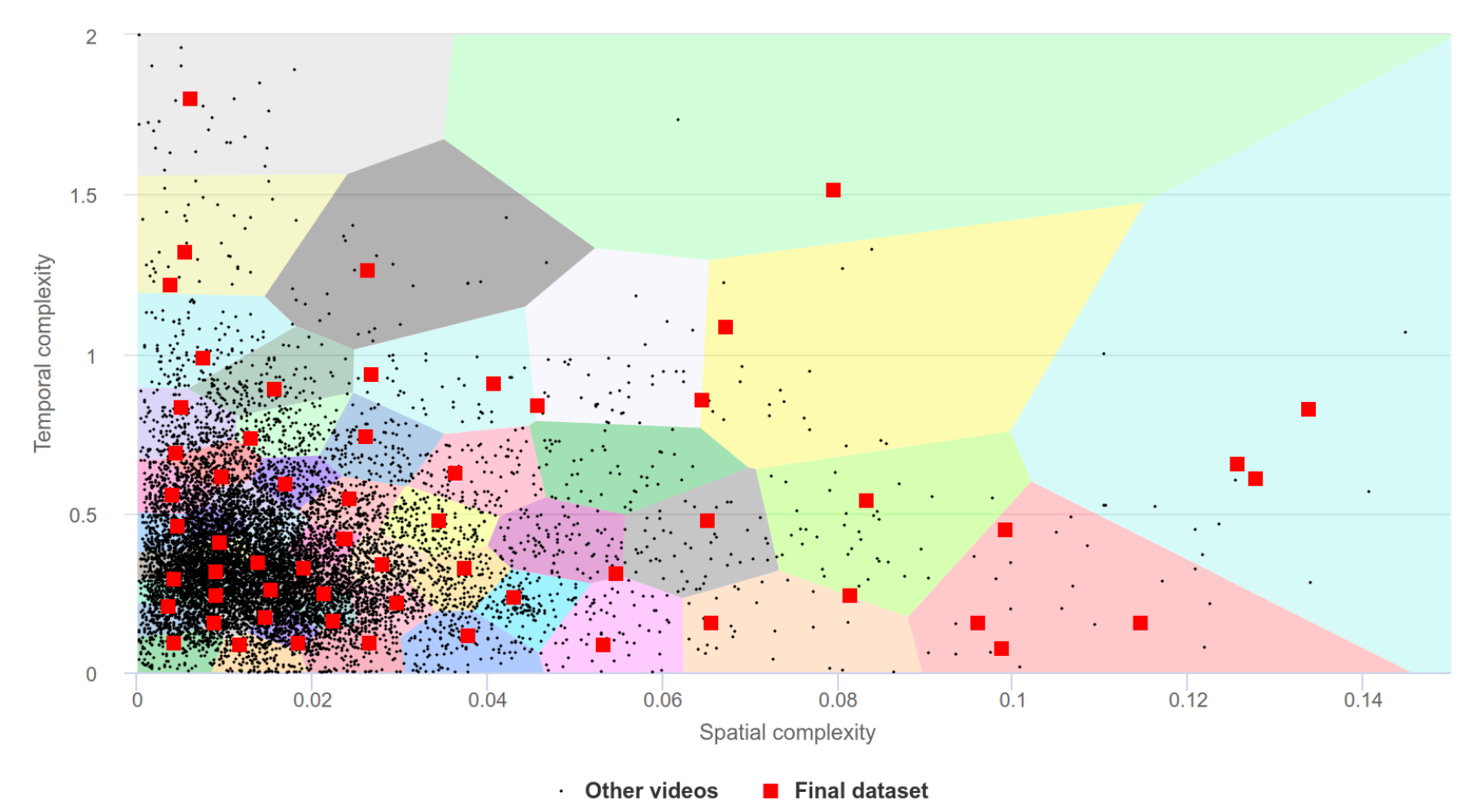 Each video was compressed with 3 target bitrates: 1,000 Kbps, 2,000 Kbps, and 4,000 Kbps, and different real-life encoding modes: constant quality (CRF) and variable bitrate (VBR). The choice of bitrate range simplifies the subjective comparison procedure since the video quality is more difficult to distinguish visually at higher bitrates.

Below the distribution of obtained videos bitrates of the dataset is provided. It differs from target values due to the usage of VBR encoding mode for some streams. 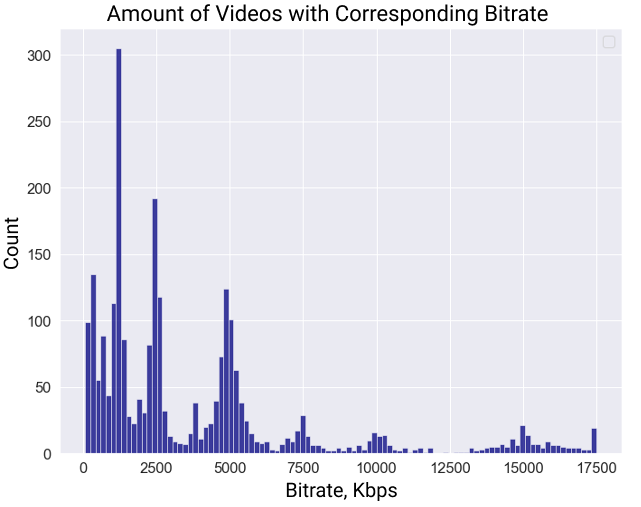 The subjective assessment involved pairwise comparisons using Subjectify.us. Each pair, which was offered to hired participants, consisted of two samples of the same test video sequence encoded by various codecs at various bitrates. After viewing each pair, participants were asked to choose the video with better visual quality. They also had the option to play the videos again or to indicate that the videos have equal visual quality.

To each study participant 10 pairs were assigned, including 2 hidden quality-control pairs, and then the collected pairwise results were converted to subjective scores using the Bradley-Terry model. Because Bradley-Terry scores were calculated only between encoded streams with the same reference video, correlations were calculated for each reference video (and corresponding encoded streams) separately. To calculate a single correlation for a whole dataset we use Fisher Z-transform to average group correlations weighted proportionally to group size. The quality-control pairs consisted of test videos compressed by the x264 encoder at 1 Mbps and 4 Mbps and were used to protect the comparison against random answers and bots: the responses of participants who failed it were excluded.

To increase the relevance of the results, each pair of videos received at least 10 responses from participants. In total, 766362 valid answers were collected from more than 10800 unique participants.

Below the steps of metrics calculation are presented. To avoid overfitting on our dataset we have used already fitted models with publicly available source code without changing default parameters.

Some metrics (VMAF, PSNR, SSIM, MS-SSIM, VQM, NIQE) were tested on each YUV component as well as using component averaging with different weights. For example, you can find results for SSIM calculated solely on the Y component and with a 6:1:1 ratio weighted averaging.

The steps for calculating versions of such metrics are presented below.

Due to the results of our small (in terms of the data size) research for IQA methods Mean Temporal Pooling was selected as a way of aggregatig of each frame scores.

Therefore, to get a quality score for a video using IQA methods, we compared the given distorted sequence frame by frame with the corresponding frames of the reference video and then averaged calculated scores. The research mentioned above will be reproduced with more data in the future.

We have also measured the metrics speed performance, expressed in FPS (the execution time of a full model runtime divided by the number of sequence frames).