It is necessary to generate intermediate views to convert stereo to multiview intermediate. 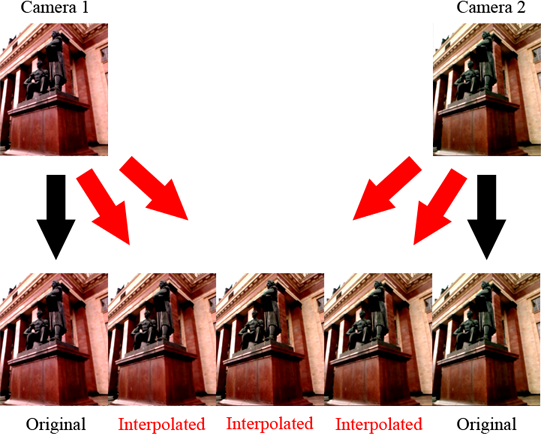 Intermediate views generation doesn’t use depth map construction and semitransparent objects processing is correct. We also work on depth and disparity map generation. It can be used in monoscopic to 3D video conversion.

Our stereo video converting doesn’t need iterative processes and it is suite for stream processing. Real-time realization is possible. We also work on GPU version of conversion for more acceleration.

It is also possible to create multiview or stereo video from monoscopic sequences. We developed a conversion algorithm that uses only temporal and spatial frame information to generate 3D video: MSU Depth Map Generation and Stereo video creation.

How to view 3D video

To view 3D images you need autostereoscopic monitor and specialized player. Depending on how many views does your monitor support you should download 5-view or 9-view video. View order is also important. You should choose view order (from left to right OR from right to left) supported by your player.

Conversion output format can be also specified to be a sequence of numbered views or other appropriate way.

All videos are encoded by XVID codec.