JPEG 2000 is a new format for image compression. It was developed to replace popular JPEG format and has a lot of advantages: higher compression ratios are available, lossless mode, progressive downloads, error correction, etc.. The main goal of this testing was the comparison of compression quality of available JPEG 2000 codecs: is there any significant difference between implementations of this standard?

Y-PSNR is the difference in brightness component. One JPEG codec is also plotted on graphs. On the following graph one can see that JPEG is far behind the JPEG 2000.
Warning: this is only one of eight graphs from our comparison! All of them can be found in the PDF with comparison. 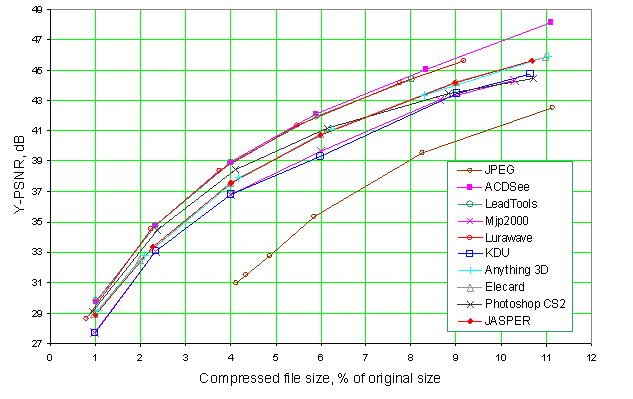 In most cases the PSNR value is in accordance with the compression quality. But sometimes this metric does not reflect presence of some important visual artifacts. For example, we can’t estimate the quality of the blurring artifacts compensation performed by some codec using only PSNR metric. Also in some cases it is difficult to say whether 2 dB difference is significant or not.

On these images one can easily see that on this test picture Photoshop CS produces more artifacts than ACDSee.
There are samples of images compressed by every codec in PDF with comparison.