Interest in advanced interactivity with multimedia data significantly increased last years. This causes an advent of new standards proposing functionality for manipulation with multimedia data (an example of such a standard is MPEG4). That is why segmentation algorithms find its application in wide range of areas including content-based representation of multimedia data, improvement of coding efficiency in video compression standards, sophisticated query and retrieval of video and other content-based functionalities for multimedia applications.

Our developed algorithm performs detection and tracking of foreground (FG) objects in video. This is done by calculation of global motion with further estimation of local motion. Detection of a FG object position is then performed based on the information about global and local motion. The principal advantage of the method is its ability to detect a FG object even in case of ultra slow motion which is not common for algorithms of this type. Another important advantages include:

This section contains segmentation results of the developed algorithm and its comparison with an algorithm developed at University of Florida.

Quality comparison of the developed method and the algorithm of University of Florida is shown in the pictures below. This example shows the results for a test video sequence ‘mother & daughter’. This sequence has two obstacles for successful segmentation. The first one is the proximity of colors belonging to different objects. And the second one (obstacle for foreground-background classification) is very slow motion of FG objects. Method of University of Florida produces segments consisting of parts actually belonging to several objects: the blue segment has parts in the area of woman’s silhouette, blue segment points are presented around woman’s head. However this comparison is not fully correct because the algorithms perform segmentation of different types. 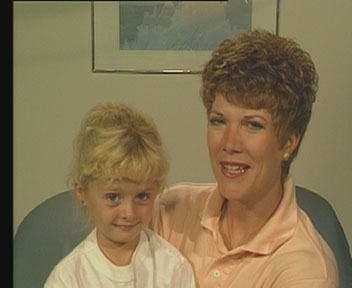 For commercial license of this filter please contact us via