For professional users and codec authors

We would like to express our gratitude to the following companies for providing us with codecs and settings:

We would also like to thank these companies for their technical support and help during our tests.

Note: DivX 6.0 is not H.264 codec. It is MPEG-4 ASP codec, it takes part in this testing only as one of the best representative of previous video codec standard MPEG-4

The main goal of this document is an evaluation of the quality of new H.264 codecs, using objective metrics for comparison. The comparison was done using the settings provided by the developers for each codec.

This is one of the most famous sequences. It represents a face with very rich mimic. Motion is not very intensive here, but on the other hand it is disordered, not forward. Intricate character of motion creates problems for the motion compensation process. In addition camera is shaking that makes the image unsteady. In the end of the sequence camera suddenly turns to the building site and there follows an almost motionless scene. So this sequence also shows codec’s behavior on a static scene after intensive motion.

This sequence is characterized by high-level noise and slow motion. In its first part the scene is almost static (the girl only blinks), then there is some motion (she abruptly moves her head) and then the scene becomes almost static again. Noise is suppressed on every second frame due to the B-frames option in MPEG-2 codec.

This sequence is characterized by pronounced rotary motion. It contains a rotating striped drum with different pictures and photos on it. Quality of the compressed sequence can be evaluated by observing details on these images.

This sequence is a fragment of the “Terminator-2” movie, which represents its very beginning. In terms of compression this sequence is the most difficult one among all other sequences that took part in the testing. That is because of three main reasons: constant brightness changes (explosions and laser flashes, see the picture above), very quick motion and frequent changes of the scene that make codecs often compress frames as I-frames.

This sequence is a fragment of “Simpsons” cartoon film. This is a classical representative of cartoon films: sketchy movement, great number of monochrome regions with abrupt junctions between them. Previously this sequence was compressed in MPEG-2 with rather low bitrate.

This sequence is a fragment of “Matrix” movie. Relatively simple movement, quite dim colors and small resolution allows codec to treat this sequence in rather simple way.

This sequence is a part of HDTV broadcast of symphonic orchestra concert. Sequence’s spatial resolution is very high. At the same time motion is rather simple and sometimes it completely disappears. There are two scene changes in this sequence. 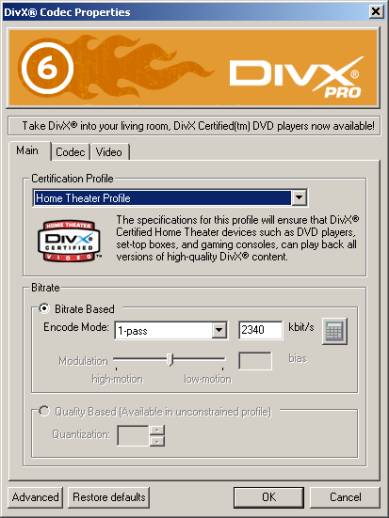 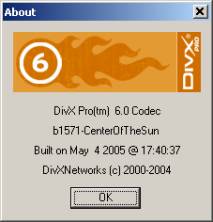 However, despite these drawbacks, codec significantly improved compression quality in comparison with previous version. On the next graph there is a comparison between different versions of DivX (metric is Y-PSNR):