Graphics & Media Lab CMC of Lomonosov Moscow State University has about 10 years’ experience in comprehensive analyzing of compressed video. Recently the Graphics & Media Lab (further: the Lab; in cooperation with IITP RAS) has published its first detailed report on Stereo-Film-Quality Analysis within VQMT3D (Video Quality Measurement Tool for 3D) Project. Meanwhile the Lab is working on the next reports on stereoscopic video quality estimation. They are expected to be made public in the second half of 2013.

Stereo and multiview video entertainment has become a very popular trend. A rapidly growing demand for 3D films after Avatar release inspired the production houses to create a lot of new stereo content. But sometimes doing fast doesn’t mean doing it well enough. Insufficient stereo video quality provoked in the audience such ‘special effects’ as eyestrain and headache after visiting 3D cinemas. The Lab decided to analyze five stereo films, captured with stereoscopic camera systems and to investigate the reasons of the irritating annoyance. Finding just a set of bad frames is rather a simple task, but it is not a useful result for a comparative analysis. For achieving a valuable result it’s important to estimate a ratio of bad and well-done frames in a movie. Such results enable finding the worst frames in one movie or comparing different films. For the purpose of revealing stereoscopic errors the Lab developed a unique tool for stereo video quality measurement (VQMT3D). Its algorithms are able to discover the key reasons of visual discomfort from 3D films viewing:

The free downloadable report consists of 246 pages and comprises of three main parts:

Ross Copeland (Post Production Stereographer) described the key artifacts in stereo films and the means of eliminating the errors:

Filming 3D is complex, and even the best rigs and crews can end up with some issues in shots that must then be fixed in postproduction. Filming for 3DTV programs is far more likely to result in more extreme errors and mismatches owing to the budget and time constraints of today’s TV programs. Some problems can be fixed easily, some are very difficult and some cannot be fixed at all. Horizontal and vertical parallax and color mismatch are the most common issues and are generally very easy to fix. It may be possible to fix small sharpness or focus disparities using the proper software, but as with parallax and color, if the mismatches are extreme, these problems will be more difficult, if not impossible, to fix. Other issues may also arise, such as keystoning, edge violations, occlusion, retinal rivalry, light polarization, and pitch or tilt (also known as the “near-far problem”), among others. Although I do assess issues visually, I also use software tools with histograms, waveforms and various display options to help determine the exact amount of adjustment needed to improve a shot. Additional development of such tools will help improve 3D filming, making my job easier and helping produce a much more comfortable viewer experience.

The proposed evaluation methodology provides a value for each frame of an evaluated stereo film. An average result for the film Avatar has been used as a reference value (marked green), because it was the first popular and high-quality stereoscopic film. These reference-level lines are especially useful when dealing with rather obscure color and sharpness mismatch metrics.

The horizontal-disparity charts enable visualization of depth-budget distribution in Resident Evil: Afterlife for a given frame (Image #3):

To compare films with each other the Lab has used the charts of two types (for each problem-detection metric). The first chart simply shows average metric values for a set of evaluated films. Image #8 shows an example chart for color mismatch metric (comparison of 10 movies): 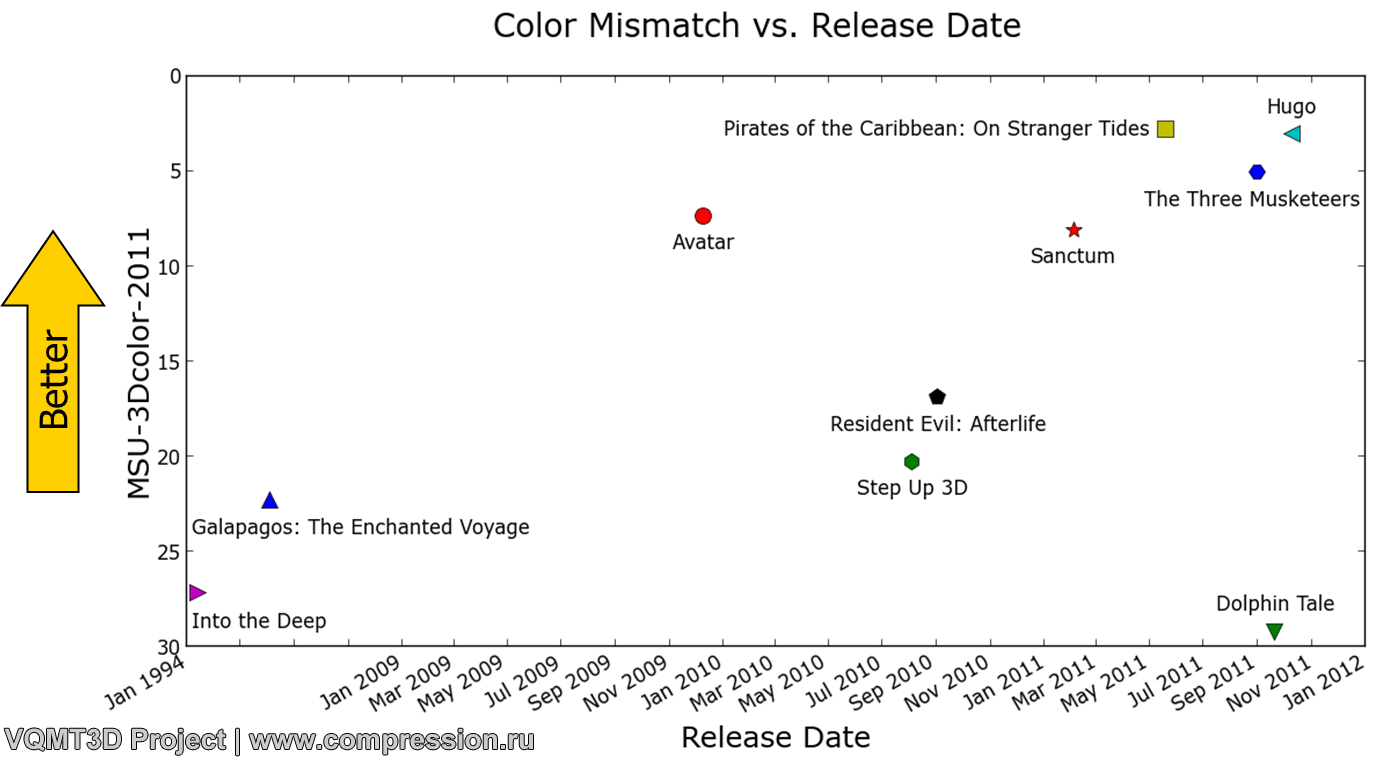 The Lab is grateful for valuable comments contributed by professional stereographers to this report (in alphabetical order):